When settling down in Toronto, it’s important to know which areas in the city are more affordable compared to others. The last decade saw an exponential increase in residential prices. As a result, the most expensive cities in the world includes Toronto - the largest city in Canada.

That being said, the real estate market can see no uniformity throughout the city. There are about 144 neighbourhoods in Toronto. While some areas are costlier, the rest are economical. However, you can find an incredible difference between the prices of these two groups. Scott Ingram, a realtor and also a chartered accountant from Toronto, researched and prepared a report of the expensive areas. He did this by closely monitoring the average detached home costs in the neighbourhood for 2020.

According to Ingram, around 15 neighbourhoods in 2020 received the highest selling price tag. Central zones topped the list.

Yonge-Eglinton, Banbury-Don Mills, and Kingsway South cater to the new entries in the list. On the other hand, Edenbridge-Humber Valley, Playter Estates-Danforth, and Trinity-Bellwoods are no longer part of the top 15.

The realtor states that Playter Estates-Danforth and Trinity-Bellwoods belong to the low detached transaction areas. A few costly transactions might have helped to push these places up in 2020.

Ingram revealed that in the year 2020, a minimum of 136 out of 144 neighbourhoods had one detached sale. Now, 107 have an average cost of above $1 million. He also added that only 29 neighbourhoods had below $1 million costs, making them come under the homes with affordable pricing.

Here are the 15 most expensive Toronto neighbourhoods in 2020:

The much renowned Toronto’s Bridle Path retained its title of ‘The Costliest Neighbourhood’ in 2020 as well. Ever since Ingram made this list in 2016, this neighbourhood has remained on the top, followed by Forest Hill South at the second position.

Ingram further mentioned that similar to 2017, the average cost of Bridle Path-Sunnybrook-York Mills (BPSYM) touched the highest mark again. Last year, 4 out of the 12 sales were over $10 million. The city recorded the costliest sale of up to $23 million. This led to an increase in its average. As compared to the 2019 median cost of $4.3, it was only $4,345,000. 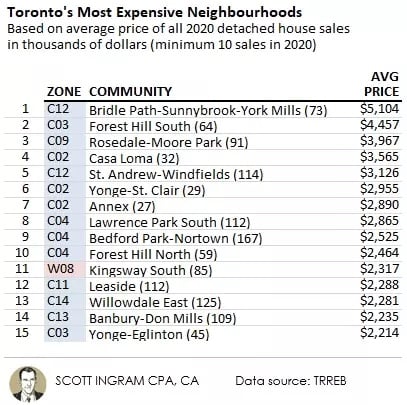 Mount Dennis topped the list of the ‘least expensive neighbourhoods.’

It’s quite interesting to note that in 2015, the neighbourhoods with single houses with an average cost of $750K or below were almost the same number (54) as million-dollar neighbourhoods (52). There is no neighbourhood left below $750K as also the price of Mount Dennis increased from $635K to $780K in 2020. 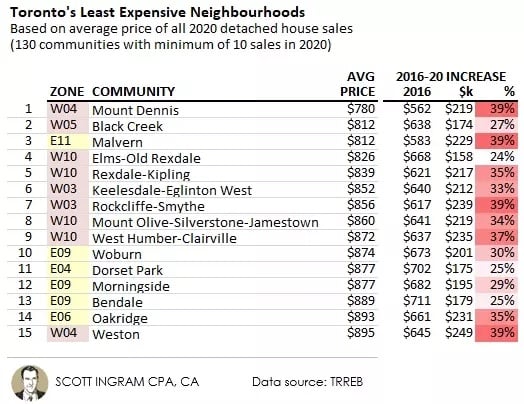 The home prices in Toronto will probably increase by 11% to reach $1,035,000 in the coming fourth quarter of 2021. Everyone is taking a keen interest in how this rise will impact the average price in Toronto’s various neighbourhoods. There may be a few additions to Ingram’s list next year!

If you're interested in Toronto's condo market sales, check out our article on The 5 Most Expensive Condos Sold in Toronto in the Past Month